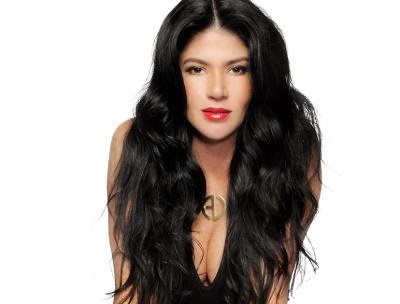 Former 'Mob Wives' cast member, Alicia DiMichele, has responded to her name being mentioned during the 'Mob Wives' reunion show .In a recent interview with VH1 she reveals that she does not blame Karen for what her father did and says she no plans to return to 'Mob Wives' next season.

I don’t blame Karen for what her father did. Karen can only be held accountable for her own words and actions [like] how nonchalantly she spoke of my father-in-law’s murder, as if it was not a tragedy for my family. To think that just because I never met my son’s grandfather that I would not be personally affected by that event is ridiculous


For me and the path that my life has taken since the show I can’t really see a time where me coming back would make sense. I have new goals and aspirations and in order for me to accomplish those goals, I will have to continue to look forward and not backward. 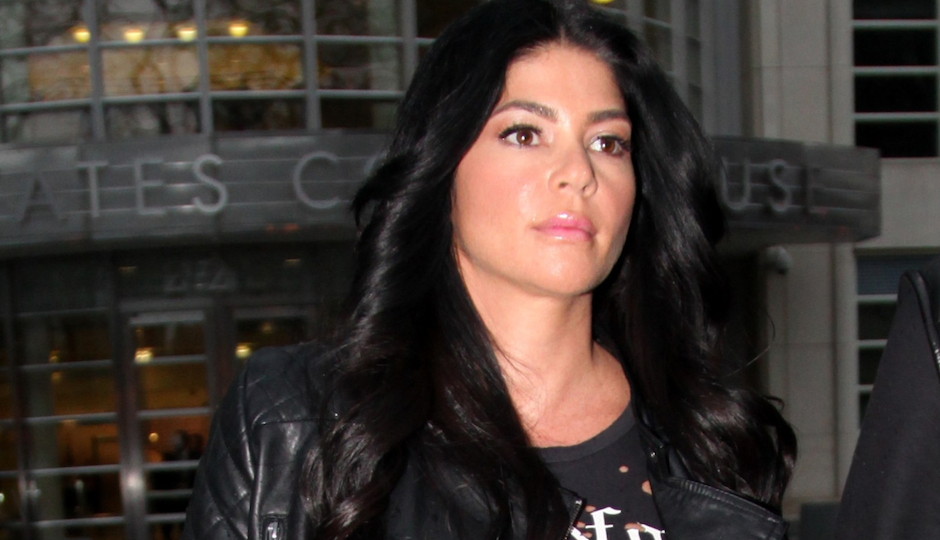 No 'Mob Wives' For Alicia

It looks like Alicia DiMichele will not appear on Mob Wives anytime soon after she found out she won't be going to jail for her embezzlement case. She received four years probation instead.  As part of her probation, She now has to not associate herself with any mobsters  and secondly must avoid drugs and meet with probation officer according to Radar Online
at August 29, 2014 No comments: 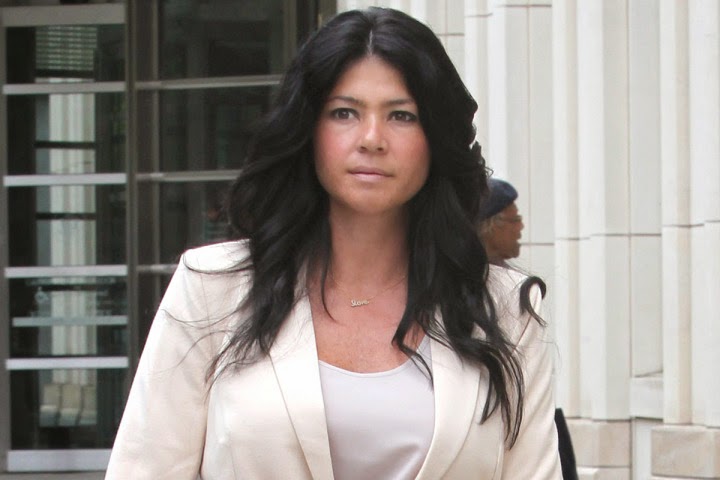 Good news for Mob Wives star Alicia DiMichele, she will not be facing jail time for stealing money from the union, instead she will be getting four years probation. She was about to face six months behind bars. If you recall last season on Mob Wives she revealed she dealing with her own court drama following her husband's arrest and resigned from the show to clean up her image.

She posted a message on her Instagram page with an image of her and two of sons waiting for her.

"My Boys were waiting by the door for me to come home and hug me after hearing the good news about my sentencing🎉 We can all finally put this behind us and move forward. We came back even stronger as a family, ready to take on whatever comes our way. We are UNBREAKABLE❤️ #familyovereverything"


Now that Alicia is free, does that mean she will return to Mob Wive?. The show is still filming its 5th season and I have she might make an appearance. Who knows? 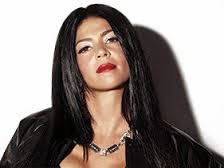 Reality: It has come out today that Mob Wives cast member Alicia DiMichele is NOT returning for another season of the show. RadarOnline reports that she resigned from the show three weeks ago. She wants 'fix up her image' to the judge in the face of her legal entanglements. In season 4, her storyline was about her legal troubles which got postponed again until June. Now that she won't be returning do you think Karen should come back for season 5?


Here is some fans' reaction to the news on twitter. 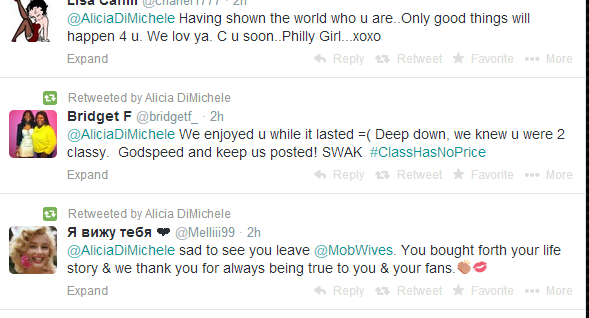 Reality:  Mob Wives newcomer, Alicia DiMichele, has revealed exclusively to Radaronline that she is planning on divorcing her husband Eddie. She says that betrayal plays a big part. if she been watching the show she discovered on those tapes that he was cheating on her but she also revealed that they have not been together for a while now.


Here is what she said

“I just would like to clarify that the issue for what’s being portrayed on the show, they’re acting like it’s now,” she said. “But it’s been four years. We haven’t been together since then.”

“Just because I’m not like the other [Mob Wives] and bash, doesn’t mean I don’t have heartache and betrayal as well,” she said. “I just choose to deal with mine differently.”

Reality: We have been following Alicia's story on new season of Mob Wives about how her husband who is Colombo member Eddie Garfolo was charged with extortion. It has been reported today from NY post that her husband was just sentenced to 7 years in prison and she is waiting if she will join him.

She was accused of colluding with her husband by working as his company book keeper and was caught on tape "gabbing about embezzling funds for their now-defunct trucking business." 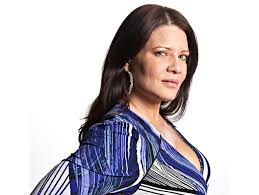 Reality: So last night the season 4 premiere of 'Mob Wives' premiered on VH1. I still don't like the fact the show now airs Thursday nights at 10PM when VH1 reality night is mostly on Sunday and Monday night. But anyway we all know Karen will not be on this season but her name was mentioned throughout the 1st episode by new cast member Alicia DiMichele. She accused Karen's father Sammy The Bull for murdering father-in-law.

This situation might the reason who shy isn't on this season. Karen took to Twitter responding to Alicia saying that Alicia's husband threatened to sue VH1 if Karen was still on the show

“@KarenGravanoVH1 The truth is I was only asked to be on the show after you were fired.This is not the storyline, it's history.”