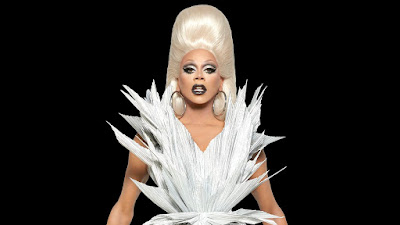 
I got some good tea for you RuPaul Drag Race fans. Now that season 9 over, rumor has it that RuPaul Drag Race All Stars 3 is scheduled to be filmed right after season 10 and they already list queens who already being considered to be on All stars 3

All thanks to Slicktalk4real.com for this tea.

Here are the queens who are being considered for the spot


The site also says that All stars 3 might have returning vets who were already on All Stars, specifically, Manila Luzon and Nina Flowers who were on All Stars season 1. Trixie, Valentina, Kennedy Davenport, and Derrick Berry have rumored to be already cast for season 3. 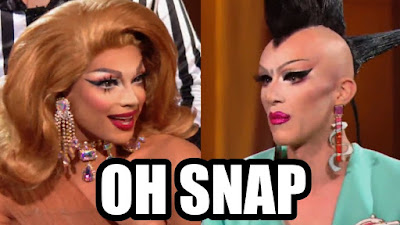 
Oh snap! the claws came out on last Friday's reunion show of 'Rupaul's Drag Race' If you watched the show, all the queens grilled Valentina for not checking her fans over death threats for her elimination. According to the other queens, it seemed like everyone got death threats when Valentina was eliminated.


Here are some tweets

Reddit also spilled some tea on the finale that will be airing this Friday. Someone who was at the taping said that the the top 2 is no other than Pepperment and Sasha!

Ru did some B roll footage of her and some VO work for promos as our Top 2, Sasha and Peppermint, got ready. They came back and Sasha's outfit was AMAZING and had a full face mask on, Peppermints was a choice. They got into places to lip sync to It's Not Right, but It's Okay by Whitney Houston, and when the song started, Sasha removed the mouth piece of the mask so you could see her lips moving, but her upper face was still covered. The lip sync was fierce! Peppermint made it look like she was getting shocked at one point and Sasha was doing so well keeping up with her. During the high point of the song, Sasha split her mask in half, revealing her face with her standard make up AND WE ALL ATE THAT SHIT UP!!! It was at that point we knew Sasha had won Season 9, but there was a bit more of the lip sync to go. Peppermint never had a reveal of any kind, but did an amazing job with the song.

'RuPaul's Drag Race' Gets The SNL Treatment, Trinity Taylor Responds To Getting Mentioned 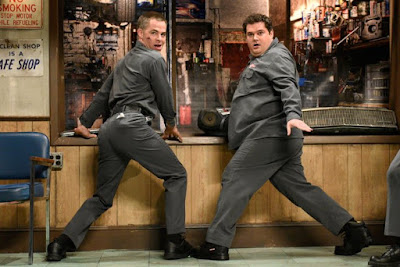 
Since its move to VH1, 'RuPaul's Drag Race' is getting even popular than before. The show won Best Reality Competition show at the MTV's Movie & TV Awards and the show also got got spoofed on SNL this past weekend. 'Saturday Night Live' did ask it which featured actor Chris Pine who was hosting the show , Kenean Thompson, Bobby Moyihan ect as mechanics doing the famous 'lip sync for your life.

I was on Instagram Live and my cast member Alexis Michelle was in the chat and she was like, ‘Oh my god! They mentioned you on SNL! Turn it on right now.’ I couldn’t because I didn’t know what channel it was, but I was so surprised.

I thought that they had maybe just said my name with the rest of the girls, but then I watched the skit and saw that they said my name several times and it made my whole week. 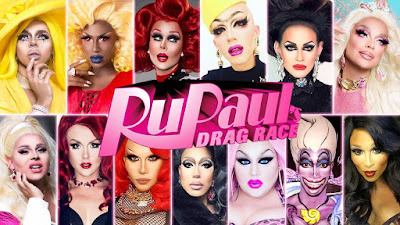 Shatay you stay. 'RuPaul Drag Race' has been renewed for a 10th season. The show, which moved to VH1 for its currents season will be returning March 2018 for season 10. Since it's move to VH1, the show scored 1 million viewers on the premiere episode.

Should Wendy Williams Host The -Pre-Show?


The stars of 'RuPaul Drag Race' are NOT happy with Wendy Williams hosting the season 9 pre-show which premiered last Friday over her 'transphobia' history.

Detox, who appeared on RuPaul Drag race' posted the message and said that Wendy Williams is profiting off the transgender community


THIS IS IMPORTANT!!!! This is why I say @wendywilliamsxo @wendyshow should NOT be hosting the @rupaulsdragrace viewing party on @vh1. She is NOT an ally. She is transphobic. If anything, she is an ENEMY. An enemy profiting off of our community. Fuck. That. #ImpeachWendyWilliams ok fine. Just #FireWendyWilliams
A post shared by Detox (@theonlydetox) on Mar 27, 2017 at 5:30pm PDT 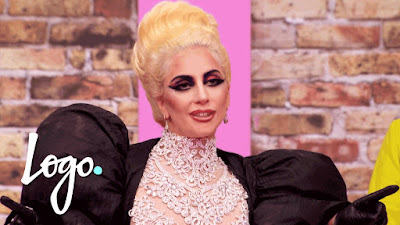 Lady Gaga To Be On
RuPaul's Drag Race

After her successful Super Bowl performance, Lady Gaga too to twitter this week to announce she will appearing on the 9th season of RuPaul Drag which premieres in March!

and here is the official season 9 cast 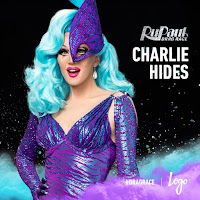 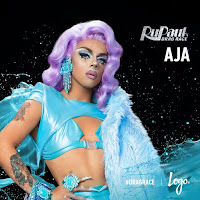 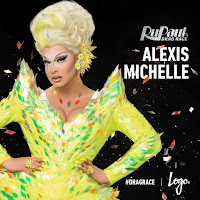 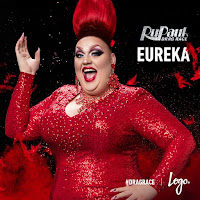 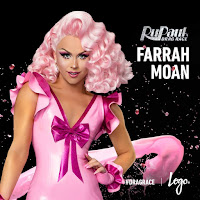 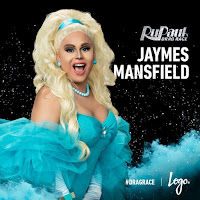 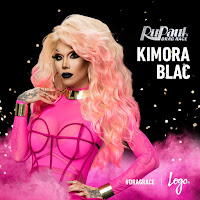 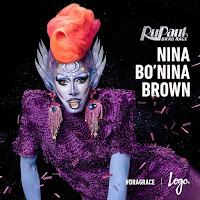 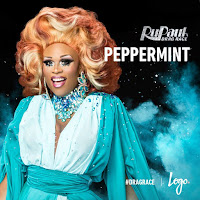 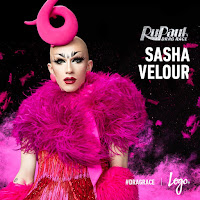 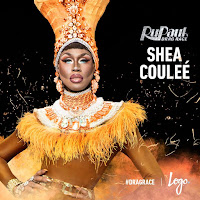 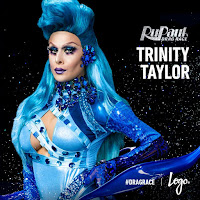 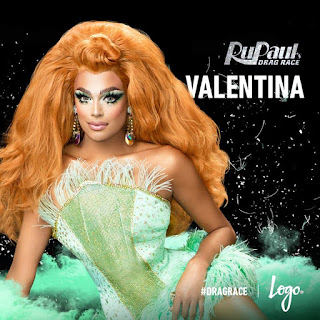 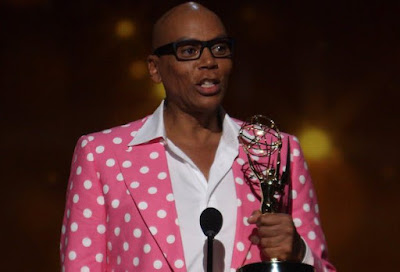 
RuPaul made HERstory last night when won his first Emmy award
last at the Creative Arts Emmy for Outstanding  Host for a reality competition show for RuPaul Drag Race.

"I really didn’t expect this," Charles said backstage after accepting the statuette. "I came here thinking I got invited to the prom and I’m going to dance my ass off tonight, but i didn’t expect that I would have this in my hand while I was dancing. It’s a very special night not just for me but for all the young people around the world who dance to the beat of a different drummer." 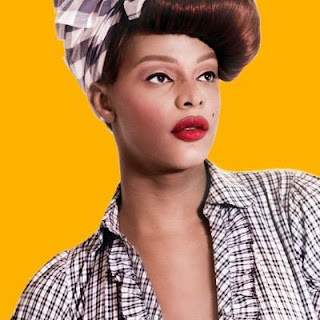 
'RuPaul Drag Race' season 2 winner Tyra Sanchez came under fire last night on social when he tweeted about suicidal people and calling them 'cowards' for killing themselves. He also then said that if people who are sucidal then they go ahead and kill themselves.

"I will not apologize for my opinion. It's my opinion and I'm entitled to it. I have no sympathy for people who take their own lives. I believe they are cowards that just gave in and gave up. My sympathy goes to the families they left behind. The ones that are still here suffering. That's who I sympathize with."

Carmen Carrera Gets Scolded On Social Media About RuPaul 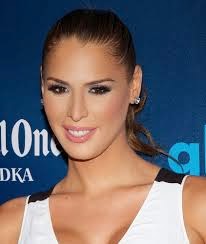 Many of her fans accused her of turning her back on RuPaul and the show that made her famous. 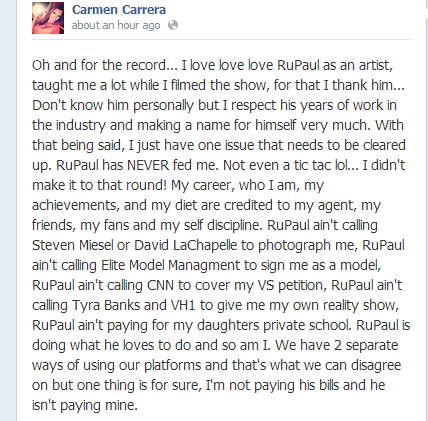 Here are some of the responses 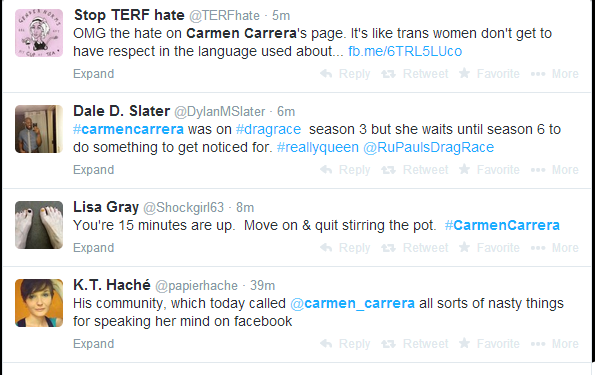 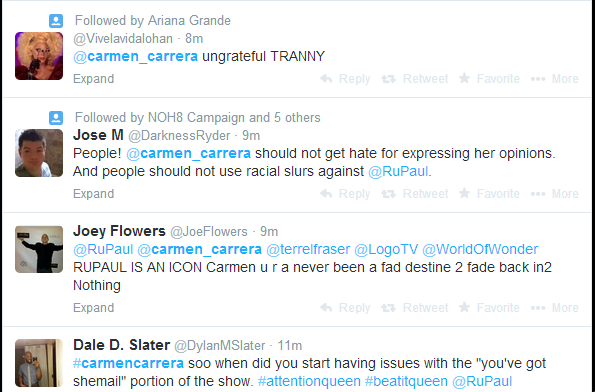 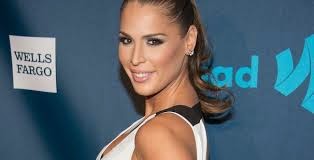 Hollywood Reporter exclusively reports the new series will focus on a group of women from Chicago sharing their experiences as transgender. Carmen Carrera will lead the five women. Tyra Banks is also the producer of the series and will premiere late 2014/early 2015.

'TransAmerica is a groundbreaking docuseries that will blow the roof

off stereotypes and set the record straight as we experience the lives of these fun, stunning women. I am so happy to be a part of telling their fierce story," Banks said. Added Rosenthal: "I am thrilled to partner with Tyra in telling the story of these incredible women and to make this unprecedented series."
Carrera will relocate from Jersey for the series and serve as a role model for the cast; the series will feature cameos from other well-known people in the transgender community. (Writer/actress/exec producer Calpernia Addams has a cameo in the pilot.)
"Being a woman means everything to me," Carrera said. "Before my transition I felt trapped, and now I’ve been set free. Carmen has arrived and I can’t wait to share my story."
at May 14, 2014 No comments:

New York, Buckwild and Smiley Sing "We Ruined The World"

New York, Buckwild and Smiley did parody of  the song "We Are The World" titled "We Ruined the World" along with other reality stars like Shangela (RuPaul Drage Race) and Sanjaya (American Idol) for the The Soup. It's hilarious check it out

Win A Date With New York For The Premiere Of 'RuPaul Race: All Stars

Win A Date With New York 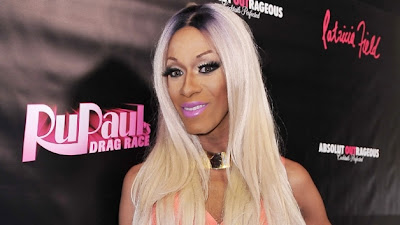 Cause of Death Heart Failure

Sahara Davenport. who was a contestant on the 2nd season of RuPaul Drag Race, died suddenly this past Monday. Reports are now coming out that Sahara Davenport (Antoine Ashley)died at Johns Hopkins Hosiptal in Maryland of heart failure. A fundraiser is now set for a  proper burial. Donate via Paypal to saharadavenportmemory@gmail.com;

RuPaul has tweeted that he is heartbroken over Antoine's death

"Shocked & heartbroken over @SaharaDavenport. Never occurred to me that we'd ever lose one of my girls. I see them as immortal."

Other stars from the show send their condolences on Facebook:

Here is a promo video of the 4th season RuPaul Drag Drag Race in which will be premiered in January. VH1 will most likely air this show on Tuesdays again.
at November 21, 2011 No comments:

Shangela Goes Off On Video About Tyra Sanchez Being Arrested

So TMZ posted yesterday that RuPaul Drag race 2 winner Tyra Sanchez was arrested. Shangela who appeared on season 2 as well is pissed about what happened. Shangela says is not crucial and that TMZ and Perez Hilton need to get it together.
at August 19, 2011 1 comment: 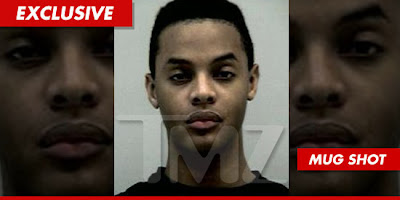 Yes! this is RuPaul Drag Race 3 winner Raja. What a difference facial hair makes.
at July 02, 2011 No comments:

This week in VH1 Twipicsm we have Buckeey and Junk dancing, Ashley and Farrah playing pinball, Shangela with Bad Girls Club Brandi and Heartbreaker.

Email ThisBlogThis!Share to TwitterShare to FacebookShare to Pinterest
Labels: flavor of love, for the love of ray -j, Real Chance Of Love, Rock Of Love, rupaul drag race

﻿
Many fans have requested to see Carmen Carrera's audition tape and he uploaded it on YouTube. It's really good  audition tape.
at June 12, 2011 No comments: