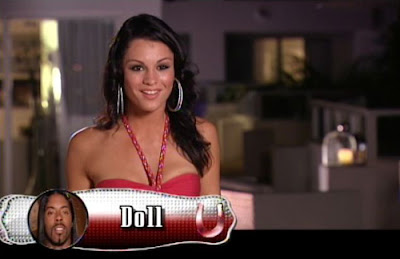 On the Real Chance of Love 2 finale, Real told Doll that he “definitely” saw her in his future. Now that a few months have passed since the show wrapped, are they a part of each other’s present? Find out below, and read what Doll has to say about her controversial audition tape and why she’s not that innocent.

How has your contact with Real been since the show wrapped?

Surprisingly, I haven’t really had much contact with Real at all, actually. I have no hard feelings towards him, but for now I’m just moving on. I’m doing my own thing.

So it’s officially not going to happen with Real?

Yeah, it’s officially not there. We don’t have a relationship established of that sort. I’m a beautiful, well-rounded girl. I’m looking for love and I’m sure any guy would love to be with me, so I’m not worried about the situation.

When did it become clear to you that things weren’t working out?

It became clear about a month after the show was over. I mean, are you kidding me? For a guy not to contact me for a whole month after we supposedly became close? You picked me out of the 10 or 15 other girls that were on the show for you. And I wasn’t pursued a month after that?

It was really disappointing because Real is a really nice guy. I have nothing bad to say about him. I feel like he’s genuinely nice, but feel like…you know, I think that he probably has other things going on, and he’s really just not ready for a relationship, which is fine. I wouldn’t really say I was ready for a relationship, either. I would say I was more prepared for a friendship than anything extremely serious.

At one point, you both talked about remaining friends regardless of who Real picked.

Do you think Real staying out of touch has anything to do with his contract for the show?

That’s what I’ve been thinking. I’ve been trying to give him the benefit of the doubt and I know that there are rules. But then again, I don’t have resentment towards him. I said I’m not upset with him, and I’d have no problem being friends with him. At this point I’m just over it and I’ve moved on and have been doing so many other things with myself.

That’s great. You were really likable on the show.

Tell VH1 I need my own show! Or I need another show! Listen, I’m really not that innocent. I don’t know why the hell everybody thinks I’m so innocent. I was coming out of four years of four years of college, so I wasn’t ready to be exposed to an environment that crazy, even though I thought I was. But you know what I can say? This show definitely brought me out of my shell so much more. I’m so much more outspoken and socially involved. It was one of the best experiences of my life.

What should we make of the audition footage Real showed in the finale of you talking about how Chance is more your type?

In real life, I tend to date guys that more resemble Chance’s characteristics. Like the clothes and the way he dresses, the chains or maybe the do-rags. I kind of like more of that “bad boy” type. But I can’t be with Chance. I cannot hold a conversation with Chance. I cannot hold his attention long enough to have a conversation with him. Real and I definitely are more alike. We’re more laid-back and quieter. I definitely think I made the right decision. I mean, hey, I won. I made a great decision!

You’re proud of winning, even though it didn’t amount to a relationship?

Hell yeah. It’s like a trophy! I won! I won a VH1 reality show! Get the hell out of here! I won after graduating from a four-year college program. So I had two A’s in a row: graduation, and winning a VH1 reality show. It’s even better because Real was a real nice guy, so I feel really great about winning somebody over like that.

What did you study in school?

I did criminal justice, and my concentration was pre-law. I was actually going to go to law school, but then I got on the show. I am really doing so much right now. I have my radio show now, and I’m doing covers and magazines, I’m doing photo shoots and everything. I really just love this life so much, so I’m really going to put the law school thing to the side for a bit and see what I can do with this lifestyle. And then I always have that to fall back on.

Were you ever worried that you’re too drama-free for reality TV?

No, because I’m really not that drama-free! It’s just that nobody really approached me in that manner. I guess because I was always the cool, laid-back chick, nobody really came at me like that. But I would never consider myself “drama-free”, and my life is nowhere close to “drama-free.” I definitely have an attitude. It’s really funny because whenever I’d do the interviews, I would be blunt about things, saying, “I can’t stand this bitch for that reason and this reason.” And they haven’t shown one negative thing that I’ve said about anybody else. And I’m like, “Well, thanks,” because now everybody loves me.

Who couldn’t you stand?

The only person I really couldn’t stand was Sassy. She was just a really evil person. She wasn’t nice. She basically has something negative to say about everybody on the show. I mean, I know it’s a competition, but if nobody bothers you, then step back and let the man pick who he wants, you know?

Your hair is your trademark, I would say.

Yeah, my hair is definitely my trademark. And now everywhere I go, I get noticed. So when I don’t want people to notice me, one of the things that I do is that I straighten it.

What do you think about Real’s campaign for moral purity, having spent time with him in a romantic context?

I can definitely see Real getting behind something in that sense, because he is very spiritually involved. I’m not sure if people notice, but he’s not really on the Internet. He’s not on Twitter, MySpace, Facebook. Or if he is, he doesn’t put himself out there like the other reality stars. He’s definitely a more centered person, and I can definitely see him doing something in a more positive manner.

I guess the main reason I ask is because on the finale, it shows that you spent the night with him.

Are you asking me if we knocked boots?!?

Kind of I guess?

Listen, after spending the night with Real in the finale, him supporting that book makes absolute sense, at least from my view point. I don’t know what the other girls would say. Nothing major went down that would make me be like, “What’s he talking about? Abstinence, my ass!”

You also opened up about your mom and dad dying. Was it difficult for you to talk about that in front of cameras?

Growing up, I never, ever talked about losing my parents. The one thing I hate is for anybody to feel bad for me. At the end of the day, yes: I lost both my parents when I was younger, but I turned out better than a lot of people who have both of their parents. So it was extremely hard for me to talk about it on the show. And of course I got very teary-eyed, because I don’t talk about it, so it’s a really hard subject to touch upon. But doing that, I think it really let everyone know that, “Wow, this is a really strong girl. This is a girl that holds her own, she’s a powerhouse.” And I think that really needed to be put out there so people can understand me more. That’s why I’m maybe more quiet and reserved and to myself, because I’m about myself. You know what I mean? I was raised like that. I didn’t have my parents there to back me up, and that explains a lot about my personality.

Email ThisBlogThis!Share to TwitterShare to FacebookShare to Pinterest
Labels: Real Chance Of Love